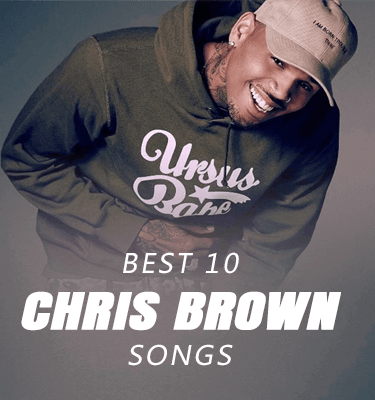 Chris Brown is glaring back!

His new upcoming 8th album “Heartbreak on a Full Moon” set to release on Oct.31 2017 by RCA Records.

This album will be a double album, why?

Brown announced that the album will have 45 songs in the new album.

I’m sure his fans will be looking forward to it desperately.

Christopher Maurice Brown was born on May 5, 1989 in a small town of Tappahannock, Virginia. He is an American singer, songwriter, and actor. When he was 11, his mother was the one who firstly recognized Brown’s vocal ability. He then learned singing and dance by himself at a young age and cited Michael Jackson as his inspiration.

In 2009, Brown was involved in a domestic violence case. He assaulted his then-girlfriend Rihanna and then ordered to do 1,000 hours community labor. It has been a tough time for him because his music was withdrew from public appearances and several commercial ads featuring him were suspended.

Here is our run down of the 10 best Chris Brown songs. If you want to enjoy offline listening, you can free download any of them by clicking the link below each YouTube video.

It futures rappers Yo Gotti, Kodak Black, and A Boogie wit da Hoodie. And Brown dancing in a shallow pool, with beauties twerking around in its MV.

Listen to this song and jump in a swimming pool maybe the best choice in the hot summer.

“High End” is also a song from Chris Brown upcoming album “Heartbreak on a Full Moon”.

Young Thug joins Future in this song, flexing over the verses. The phrase “everything high end” pop in each of their verses makes the song catchy for the audience.

Its MV is worth to mentioned, directed by CB himself and Spiff TV. It’s full of Halloween spirit, sees 3 artists dancing with ghouls and goblins at a haunted house party.

Chris Brown like a vampire wear in gold chains, everyone moves and sings strike the eye and ear.

“Questions” still comes from the upcoming 8th album “Heartbreak on a Full Moon”.

“Questions” is a dancehall song, with a bouncy island beat that heavily samples Kevin Lyttle’s hit song “Turn Me On”. It peaks to No.11 place on US Rhythmic Billboard.

Brown questioning a girl whether he could bring her home, while dancing is always his most attractive way to question.

You can compare this version with Kevin Lyttle’s “Turn Me On” to see which one you prefer.

“Don’t Judge Me” is from Chris Brown 5th album “Fortune”.

It receives positive reviews from music critics; some consider it is a highlight of “Fortune”.

It mainly refers to his former relationship with Rihanna, with the lyric in which Chris Brown asks her to forgive him “for the past indiscretions” and “move on with the future.”

In my eyes, “Don’t Judge Me” is the honest music that Chris Brown ever made; he admitted the mistake that he made in the past.

“And baby when I’m deep in now
I’m slow it down, ‘cause ain’t no speed limit
When we’re moving at the speed of sound
We going turn all the way up when the lights down”

“Privacy” is the third single from Chris Brown upcoming 8th album “Heartbreak on a Full Moon”.

It’s an R&B slow jam, which contains a vocal interpolation of the 1990s dancehall song “Tight up Skirt” in the first part.

Its MV is Neo-colored, fancy cars and dance filled which a personal seal of Chris Brown’s music video. While his beautiful voice is so enchanted, making you listen again and again.

And it also peaked at No.4 on the US Hot R&B/Hip-Hop Songs chart and kept for 14 weeks.

In its MV, singers Usher, Trey Songz and Ty Dolla Sign also make cameo appearances which make it like a big party on the street.

Chris Brown performs so well that everyone feels like himself/herself a dancer in this song as well.

“Yeah it’s Breezy
Pulled up on your bitch, tell your man I’m sorry
Hundred on my wrist jumpin’ out the ‘rari
Ooh she hit the splits she know how to party”

“Party” is the first single released for the upcoming 8th album “Heartbreak on a Full Moon” on Dec 16, 2016.

It featuring Gucci Mane and they show up in the music video as well. Chris invite they two to an empty warehouse with a cast of dozens for dancing party

As the music brings dynamic atmosphere, dance is the best of all to express feelings.

“Ayo” serves as the lead single from Chris Brown and Tyga‘s collaboration album “Fan to Fan”.

This is not the first cooperation of CB and Tyga, but this song brings most success and positive music criticism.

“With You” is 3rd single from Chris Brown 2nd studio album “Exclusive”.

It peaks No.2 on the Billboard Hot 100 and No.1 on the US Pop Songs chart. And it topped the charts in New Zealand and in the top 5 in several countries.

It won the accolade for “Best Male Video” at the 2008 MTV Video Music Awards.

“With You” would be the song of Chris Brown that I listen to most often. The warm guitar sounds pop in and CB’s romantic vocal combines perfectly.

Chris Brown - With You

“Look at Me Now” is a song as the 2nd single released from Chris Brown 4th studio album “ F.A.M.E”, and it features Lil Wayne and Busta Rhymes.

It reaches No.6 on the Billboard Hot 100 and No.1 on the Hot Rap Songs and Hot R&B/Hip-Hop songs charts.

This song would definitely amazing in Chris Brown 4th album. The rap verse from Lil Wayne and Busta Rhymes is out of fantastic. Busta’s fast-rapping flurry is so impressive.

Chris Brown has released 8 studio albums, 8 mixtapes, 9 promotional singles and 106 singles. According to Recording Industry Association of America, Brown was the 9th bestselling digital-single artist in the United States with sales of 49.5 million.

First, I need to copy and paste the URL of the YouTube playlist, which I have listed above, to the search bar of AnyMusic. Then, I click “All” to download all videos at a time. Besides, I can also convert video files to audio formats. 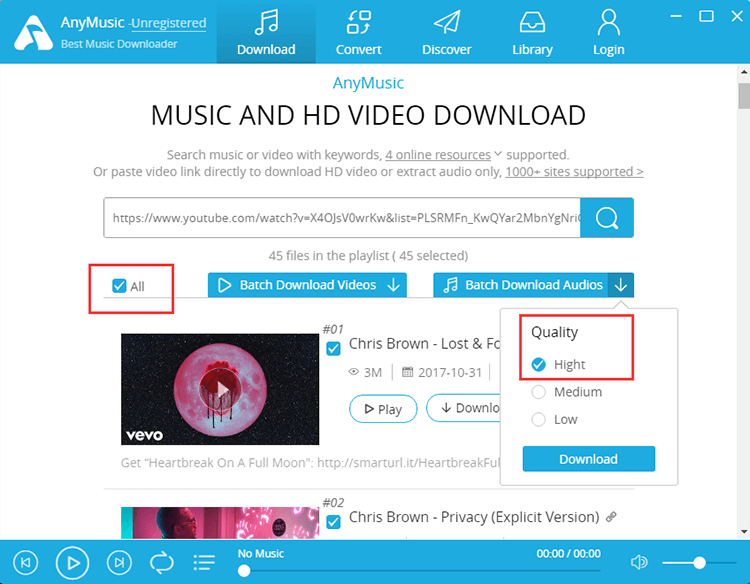 Currently, Chris Brown does not have upcoming events, while you can still track his official site here to get the latest news.

Fill out my online form.
Online contact and registration forms from Wufoo.

That’s all for Chris Brown’s 10 best songs on YouTube.

Did you have all Chris Brown top 10 songs free download?

It’s hard to keep still when you listening to Chris Brown’s songs. Hope you enjoy this music.

See you next time.

[ Related Articles to The Best of Chris Brown Songs ]