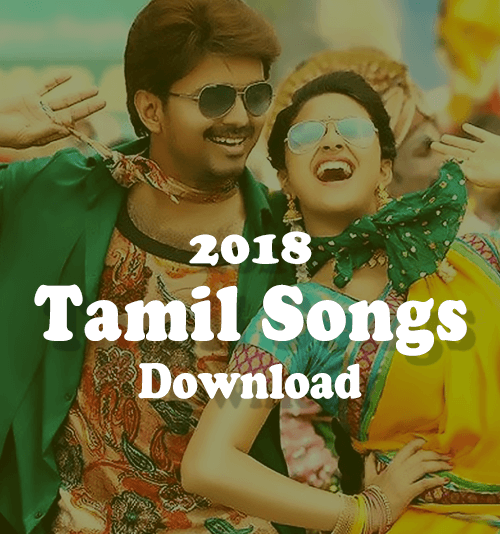 Lots of people around the world are spellbound by Tamil songs.

Are you interested in Tamil songs or Hindi songs?

Want to know about the latest Tamil songs in 2018?

In this article, I will show you 10 newest 2018 Tamil songs and the best way to get Tamil songs free download online without registration.

“Naana Thaana” is a song from a 2018 Indian Tamil-language movie called “Thaanaa Serndha Koottam”. It was written by Vignesh ShivN who works in Tamil cinema. The accompanying video has been played for over 3 million times on YouTube.

2. All the world is a stage - Arrol Corelli

“All the world is a stage” is one of the songs coming from the latest Tamil drama film “Savarakathi”, which was released on 9 February, 2018. All the music in the film is directed by Arrol Corelli.

Performed by Reema, the song is a part of an upcoming Indian Tamil-language action comedy film “Pakka”, which was originally produced in February 2017. The music director of the film is C.Sathya, a South Indian music composer.

“Poovukku” is a song written by Vairamuthu, which is regarded as one section in an Indian Tamil-language comedy-drama film, Nimir (2018). Expect the song “Nenjil Maamazhai”, the rest songs in the film were released on 18 January, 2018.

Vijay Chandar created the lyrics and also sings this song as music from a 2018 Tamil action thriller film, Sketch. Different from other Tamil songs, the song is more powerful on the rhythm to cater to the theme of the movie.

“Arumbey” is the soundtrack to a 2018 Tamil action drama film named “Kaali”. The song was composed by Vijay Antony and its lyrics are from Vivek. The video has received a lot of views within a week after being uploaded on YouTube.

“Engae Endru Povathu” is considered as the soundtrack to the film “Thaanaa Serndha Koottam” as same as the song “Naana Thaana”. The song was written by Thamarai, who is a Tamil poet, lyricist, writer and former journalist.

“Raakkozhi Kootalinga” is one of the songs in the film called “Oru Nalla Naal Paathu Solren”, a Tamil adventure comedy drama film. The lyrics were written by a famous lyricist in Tamil film industry whose name is Muthamil.

As the first song released in the upcoming Indian horror thriller film “Bhaagamathie”, it was written by Sreejo and undoubtedly it is a big success. The song is slow and warm with Bhagyalakshmi’s soft voice.

The song was written by Sarathi and was composed by Jakes Bejoy as the lead soundtrack to the 2018 Indian Tamil action comedy film named “Mannar Vagaiyara”. Madhu Balakrishnan, the singer of the song, is a well-known Indian playback singer.

AnyUTube is a wonderful video downloader and converter.

Let me show you how!

Step 1 Copy the Link from YouTube and Paste it on AnyUTube
Open AnyUTube.
Put the YouTube playlist link on AnyUTube and click the search icon.
Then you will get the result soon. 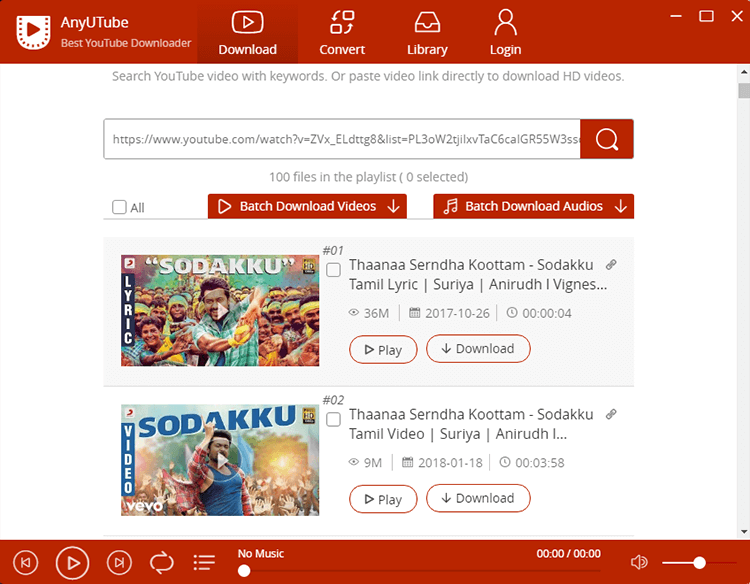 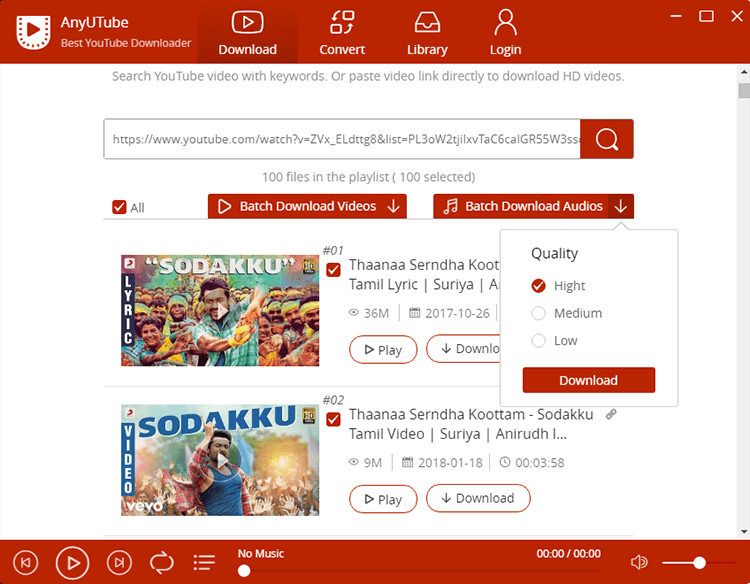 Are you interested in Tamil songs or Hindi songs?

I prepare 10 playlists which contain both Tamil songs and Hindi songs for you.

You can download all the Tamil song playlists via AnyUTube!

Have you found out your favorite Tamil songs or Hindi songs from the article?

Do you know how to get Tamil songs free download now?

Don’t hesitate to try it and I’m sure you’ll like AnyUTube.

If you have any questions, please tell us below.

We’ll try our best to help you solve the problems.

Thank you for reading!

AnyMusic is not available
for iOS now

Leave your Email to get direct download links of AnyMusic for Windows, Mac or Android.

AnyVid is not available
for iOS now

Leave your Email to get direct download links of AnyVid for Windows, Mac or Android.

AnyUTube is not available
for iOS now

Leave your Email to get direct download links of AnyUTube for Windows, Mac or Android.