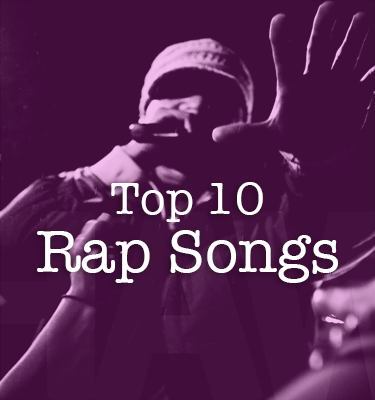 When it comes to rap music, the first thing you may come up is African Americans.

They have the inherent rapping ability.

The lyrics and beats, they are all blended into one song.

We compiled a list of best rap songs for you.

According to the votes by netizens from all over the world, this is a list of top rap songs you can’t miss!

Let’s see what we are going to share today!

Eminem is an American rapper, the first time I know about him is he co-worked a song with Rihanna. This song was released on November 21, 2000. The song tells the story of a person named Stanley “Stan” Mitchell who claims to be the biggest fan of Eminem.

It was NO.1 in eleven countries, and it was ranked at number 58 on Rolling Stone Magazine’s list of “100 Greatest Hip-Hop songs of all time”.

This song was released on November 4, 1999. I am surprised when I listen to this for the first time because it was used as the background track in short video in some video APP.

This is a special and kind of controversial rap song because is a protest song by the rap group N.W.A. Protesting police brutality and racial profiling. It talks about the tensions between black urban youth and the police.

It was ranked NO.425 on Rolling Stone’s list of the 500 Greatest Songs of All Time.

This is the last single of Tupac Shakur (Makaveli is his new stage name). It is one of Shakur’s most famous singles. The single peaked at NO.12 on the R&B chart and NO.8 in the rap singles.

The song captures Makaveli zoning out the violence and negativity surrounding him, praying to God, and making biblical references.

This rap song was released 24 years ago. The song peaked at NO.7 on the Billboard Hot R&B/Hip-Hop Songs chart and on the UK Charts at NO.27.

This is a 90s rap song, when you listen to this you will get a sense of period. If you never try, then you can give a shot!

In the song, Shakur expressed his childhood poverty and his mother’s addiction to crack cocaine but argues that his love and deep respect for his mother supersede bad memories. I think the rhythm is quite attractive, I start to overplay it since I know that!

The song ranked at NO.1 on the Billboard Hot Rap Singles chart for 5 weeks. It has been consistently ranked among the best of its genre, appearing on numerous “greatest” lists. I think the reason must be it has a huge influence not only on rappers but also in the society.

Juicy is the first single of The Notorious B.I.G. in 1994. This song was considered as one of the greatest hip-hop songs of all time.

In this song the rapper talk about his childhood years in poverty, his dreams are to become a rapper and he was successful when went through his early music influence and his hard work.

N.W.A was widely considered one of the greatest and most influential groups in the history of hip hop music. Rolling Stone ranked N.W.A NO.83 on their list of the “100 Greatest Artists of All Time”.

This is an original track by Eminem himself. Many critics praising it as the Eminem’s best work to date. Eminem’s rapping ability, the lyrics, and the production were also praised as well.

“Lose Yourself” won the Academy Award for Best Original Song in 2003. It peaked at NO.1 on Billboard Hot 100 and also topped the Pop Songs chart for 7 weeks.

This is all we got today!

Rappers, this group has its special position on the music stage. They try their best to thrive the rapping skills.

We are look forward that more and more fresh rappers can bring us more masterpieces.

If you have any rap songs that we do not recommend yet, welcome to leave a comment below and maybe it will be listed in next articles. OK? Man?