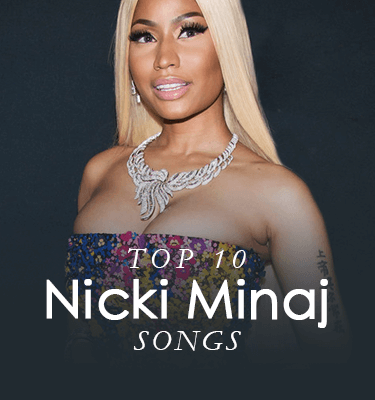 Musically, she was recognized for her fast-flow rap style and explicit lyrics.

Besides, she has unique taste on her outfits.

She is straightforward and distinctive.

In her songs, we can feel her power and her passion for music and life.

“Bang Bang” is a trio works recorded by Jessie J, Ariana Grande and Nicki Minaj. The song which peaked at No.3 on the Billboard Hot 100 is Minaj’s tenth top 10 single in the United States as well as her first No.1 single in the UK.

When I firstly heard “Bang Bang”, I was like out of words. I’ve never ever heard women speak sex so freely in pop music. I can’t deny how cool that is.

“Anaconda” was chosen as the second single from Nicki Minaj’s third studio album, The Pinkprint (2014). It was nominated for Best Rap Song at Grammy Awards and won the Best Hip-Hop Video at MTV Video Music Awards. The video for the song broke record on Vevo in its first day of release.

The song itself received two completely opposite reaction from critics. Some thought that it sticks to Minaj’s rap roots while others called it as degrading. So, what’s your opinion about this?

The song was the fifth single in Minaj’s debut studio album, Pink Friday (2010). It peaked at No.3 on the Billboard Hot 100 and it has sold 5 million copies in the United States.

Minaj explained the song like “‘Super Bass’ is about the boy that you are crushing over”, she said. “And you kind of want to get your mack on, but you’re taking the playful approach.” The emotion relationship between people is always subtle, and I can feel it in this pop-rap song.

“Raise your bottle and cup in the sky
Sparks in the air like the fourth of July
Nothing but bad bitches in here tonight
Oh, if you lame and you know it be quiet…”

“Only” is a song which released by Minaj after rumors being split. Apart from the nomination for Best Rap/Sung Collaboration at Grammy Awards, the song was certified triple platinum by RIAA.

This rapping with metaphors song features three rappers rapping a verse each and it’s about shutting down rumors between them. The explicit lyrics and a sort of hip-hop vibe make the song a story.

Upon its release, “No Frauds” caught up wide attention and sold 78,861 copies during the first week which topped the R&B/Hip-Hop sales charts. It’s a response to Remy Ma who launched a diss track pointing to Minaj.

As the song goes, it doesn’t feel like the Nicki Minaj thing. The song is so different from those traditional Minaj songs. It has feel-good vibe which contains almost no rapping. Anyway, I’m going to play it in rotation.

“Right by My Side” is from Nicki Minaj’s second studio album, Pink Friday: Roman Reloaded (2012). It features Chris Brown who is an R&B singer. The song peaked at NO.21 on the US Hot R&B/Hip-Hop Songs chart and marked as NO.51 in the Billboard Hot 100.

The song is much more like an up-tempo ballad. Just as Minaj said, “Toward the end of the album I wanted something more melodic that I could give to urban radio and that pop radio could enjoy as well.” And then she did it.

“Feeling Myself” was from Minaj’s third studio album, The Pinkprint (2014). It is Nicki Minaj and Beyoncé’s second collaboration and it was highly-anticipated among fans.

In the song, there’s tough Nicki and soft Beyoncé. “Nicki Minaj is the only woman who can get Beyoncé to do her bidding.” like Molly Beauchemin commented. The song has a beginning, middle and an end, just like a short play.

“High School” features rapper Lil Wayne. It reached No.15 on the Billboard Hot Rap Songs. Nicki Minaj confirmed that the song is the sequel of a mixtape song called Hood Story.

This song is about some kinds of friends with benefits relationship. It’s still a typical Minaj song with Lil Wayne to help icing on the cake.

The song which featuring Drake topped the US Hot R&B/Hip-Hop Songs and Hot Rap Songs charts. Also, it received nomination of Grammy Awards in the category Best Rap Performance, and it peaked at No.13 on the US Billboard Hot 100 as well.

You can simply guess what it is all about from the title of the song. Minaj explained it as “it is about 2 kids that grew up on the same block. They shared their dreams of making it as rappers.” I just can’t help turning up the volume when I bounce to the music rhythm.

That’s all about the top 10 Nicki Minaj songs.

By the way, would you mind to share your top 10 music with us?

Please feel free to leave comments below if you have any questions or suggestions.

Have a good day!