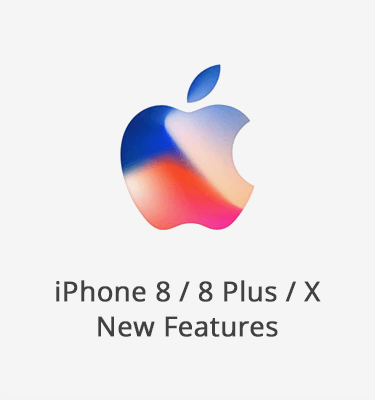 Before that, some people still hesitate to buy the iPhone 7s or wait for the 8.

Now they don’t need to struggle anymore, ’cause Apple just skips the iPhone 7s and jumps straightly to the iPhone 8.

It’s been a decade since the release of the first version of the iconic handset.

What surprises can we expect from iPhone 8?

I believe you are excited as I am.

Till now, the Apple launch event was over.

TiToday, let’s review the iPhone rumors and see what the real iPhone looks like.

Rumors are swirling over the new features of the new iPhone 8 before the launch.

So what have we predicted? Let’s review those rumors!

Actually, there are several versions of iPhone 8 imagines, but we can’t sure which one is the real one, maybe none of them.

And the most possible one is this: 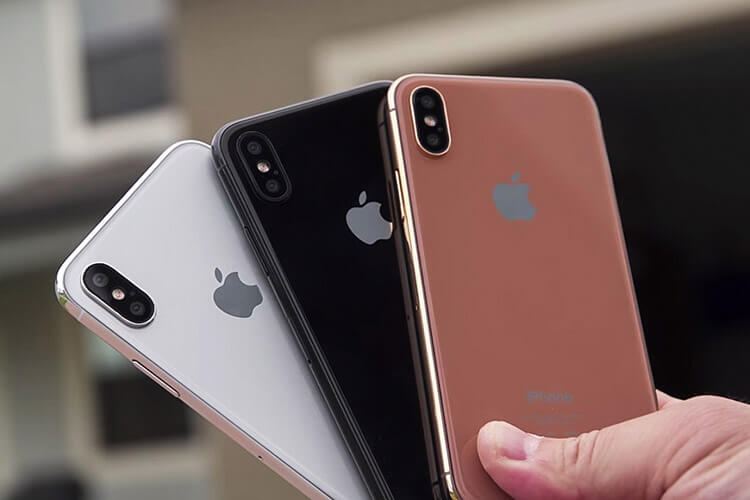 Some people don’t like the leaked image of iPhone 8 for its ugly design, we all know the black and white, but what is it beside them?

Well, that is the new iPhone 8 color – Blush Gold.

When I see this new color, the first thing came to my mind is this: 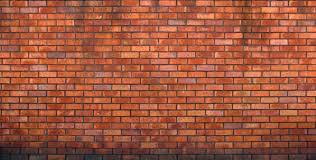 Apple has used the usual silver, gold, and black color, but what’s the hell is the “Blush Gold”?

Noble and glamorous iPhone has always been known for the good looking. Why this color? When I see this word, a girl’s blush face comes into my mind, but when I see the dummy iPhone 8 imagine, yeah, maybe all the iPhone 8 inspirations come from the bricks, who knows?

What are your thoughts on the leaked iPhone 8 design?

But whatever, I bet there will be tons of people rush to Apple store and get one. And you will be one of them.

About iPhone 8 size, it is predicted that the size of iPhone 8 is roughly the same as the iPhone 7, but because iPhone 8 cancel its home button, iPhone 8 size will larger than 5.5-inch iPhone 7 Plus.

The iPhone 8 screen is slightly longer than the iPhone 7 Plus screen, so you can display more web content or other information. But at the bottom of the dock except, each page still shows six rows of applications, a total of 24 icons.

According to the report, Apple will adopt new material into the screen design and it will be an edge-to-edge display and the body will use glass instead of aluminum. 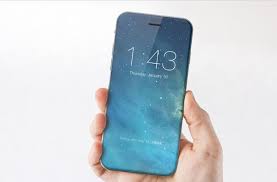 What is the OLED display?

OLED screen is a “self-luminous” screen, do not need to use the backlight, the screen plasticity can be flexible, with a higher contrast, the resolution ratio is more ideal.

At the same time because the OLED material can also reduce the screen produced by the blue radiation, less damage to the eyes. Because it is solid-state structure, the drop resistance is also relatively strong, wider color gamut, the image is not easy to be distorted.

It is reported that iPhone 8 will have a new funny function that is Rear vertical camera. 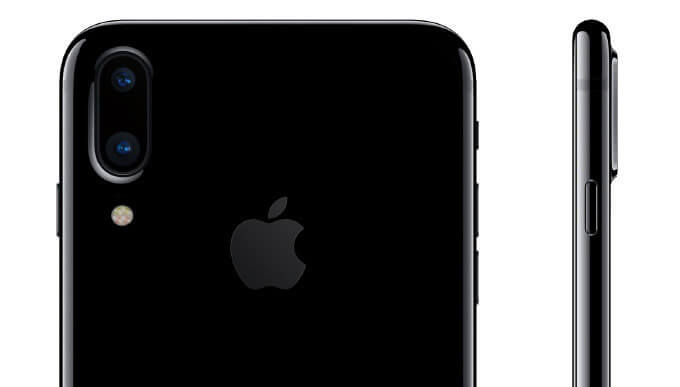 The front camera and rear camera of iPhone 8 will have 3D sensing function.

The front camera is expected to use infrared for face recognition instead of Touch ID, also supports 3D self-timer function, you can shoot more three-dimensional effect of the photo.

However, have you notice the shape of the camera? If the inspiration of “Blush Gold” comes from “bricks” then the camera must come from the traffic light. 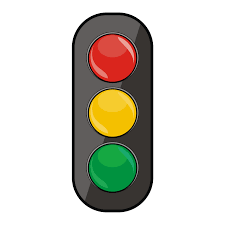 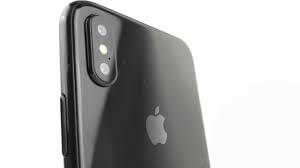 Since the introduction of the first generation of iPhone in 2007, the home button is the core element of the iPhone.

But according to the informed sources, Apple will soon release the iPhone 8 will be eliminated Home button, instead of using the gesture to control the implementation of the Home key features, such as return to the main screen, open the multi-tasking interface.

It is reported that the bottom of the iPhone 8 screen will display a very narrow software control bar, in order to replace the Home button. The user can drag the phone up by dragging the software bar; if within the application, the same gesture will enter the multitasking interface. At this point, the user can continue to close the application up to return to the main screen. 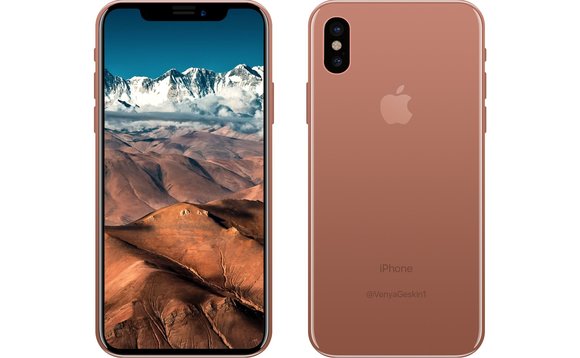 Beyond that, Apple has also applied for the use of Wi-Fi signal for wireless charging of the patent. That is to say, the iPhone8 will use wireless charging technology, as long as the user gets into a specific area, charging can start automatically. 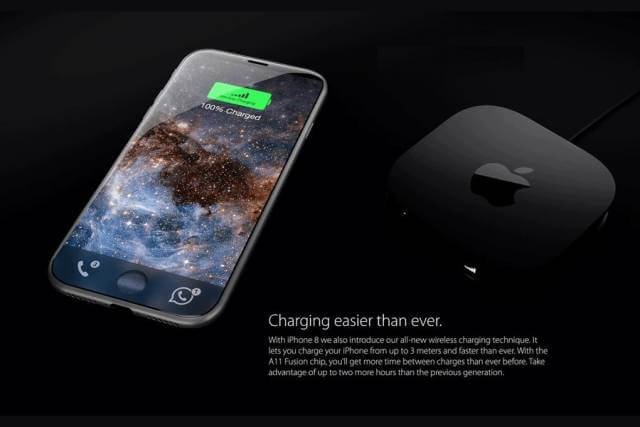 As long as we shoot the front of the road, iphone8 can be a navigator by combining with the map automatically; as long as speak out the scene identified by phone, iphone8 will be able to introduce it to us. 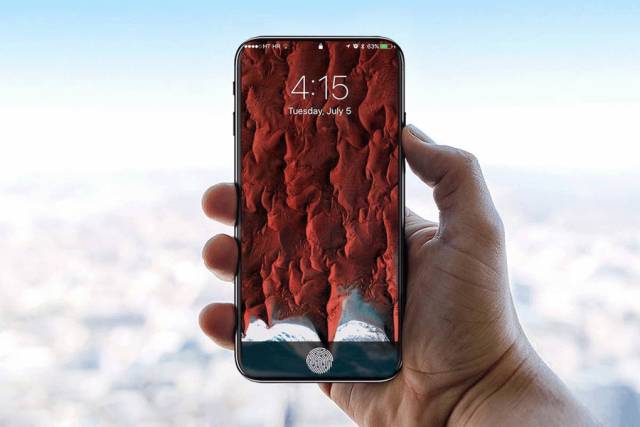 Apple has repeatedly following naming rules like iPhone 4, iPhone 5, and iPhone 6 and so on.

However, CNET article pointed out that this year is the 10th anniversary of the advent of iPhone, maybe the new iPhone will be called iPhone10? Or iPhone X?

Some people even think that this latest, most high-end, and possibly very expensive mobile phone will be called iPhone Pro. Just like the iPad now has the same iPad Pro.

Rumors 4. What is the expected price of an Apple iPhone 8?

In July, John Gruber John Gruber told CNBC that he expects the iPhone8 to be priced at more than $ 1,200.

UBS pointed out in the research report, Apple OLED mobile phone 64GB version of the starting price of 900 US dollars. Apple will also launch 256GB iPhone8, priced at $ 1,000.

In short, it will be EXPENSIVE.

That’s all rumors we’ve got before.

It seems that all rumors about new iPhone are true, but have you expected the coming of iPhone X?

We thought iPhone 8 is the biggest star, but it seems that iPhone 8 is just a supporting role to the iPhone X.

Let’s have a look!

First, let’s see the new look of iPhone 8, iPhone 8plus and iPhone X. 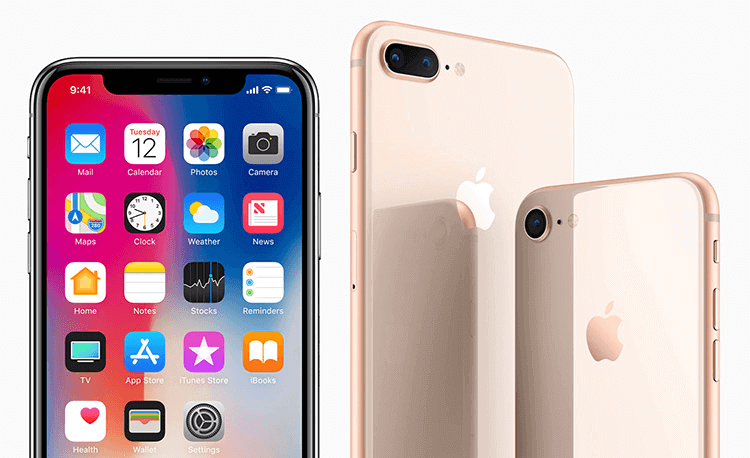 Are you amazed or disappointed by the looking?

Ok, just cut the crap and see what’s the new of these iPhones.

Actually, iPhone 8 and 8 Plus is the regularly updated version of iPhone 7 and 7 Plus models featuring with faster processors, a True Tone display, and upgraded cameras.

iPhone 8 updates the A11 chip, the glass panel, and wireless charging technology that make iPhone 8 and iPhone 8 Plus becomes the perfect high-performance alternative of iPhone X.

Here’s the can’t-miss information of iPhone 8 and iPhone 8 Plus:

"The future of smart phone” which is the announcement of Apple's iPhone X on the release meeting."

iPhone X, the Roman figure X just echo the iPhone launched the 10th anniversary. Most of the rumors about iPhone were displayed on iPhone X. 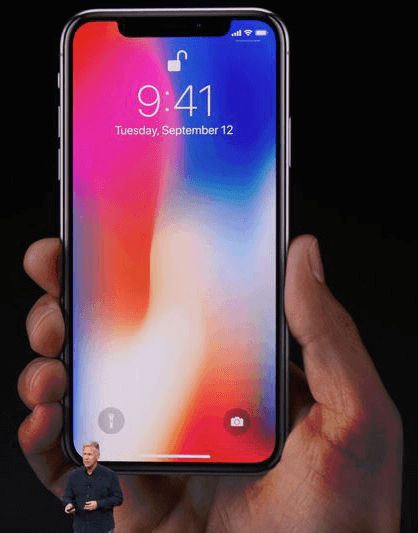 Apple says on its official website that: “Our vision has always been to create an iPhone that is entirely screen. With iPhone X, that vision is now a reality. Say hello to the future.”

t’s the first 5.8 inchOLED display in an iPhone, Apple calling it a Super Retina display. 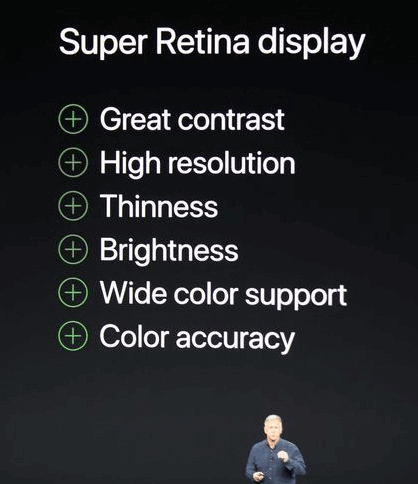 As you can see, there’s no home button anymore. It’s pretty weird right? Anyway, you can figure out how to adapt to the new screen from this article - How to Use iPhone X without Home Button.

iPhone X very narrow front border has not allowed putting any traditional physical buttons, Apple neither before using the rumors of the virtual Home button nor use the side button to replace the Home button, the original Home key was operated by the touch. Slide from the bottom edge is equivalent to click Home, press and hold for a sec to enter the multitasking interface. 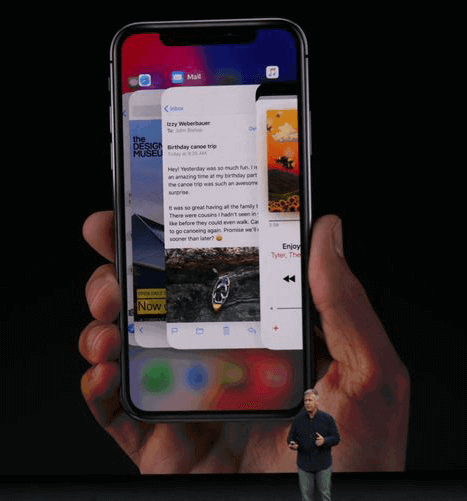 Face ID is the biggest change since iPhone’s inception. You unlock the iPhone by having a look at it. Apple said that compared to fingerprint unlock, Face ID is more secure, the insecurity rate is only one millionth, unlock faster, and can be compatible with Apple Pay, pay more convenient, and can support third-party APP. 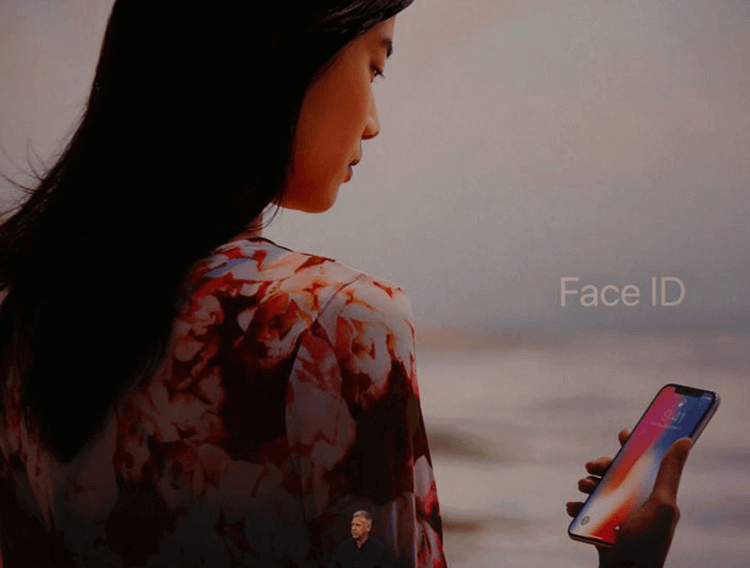 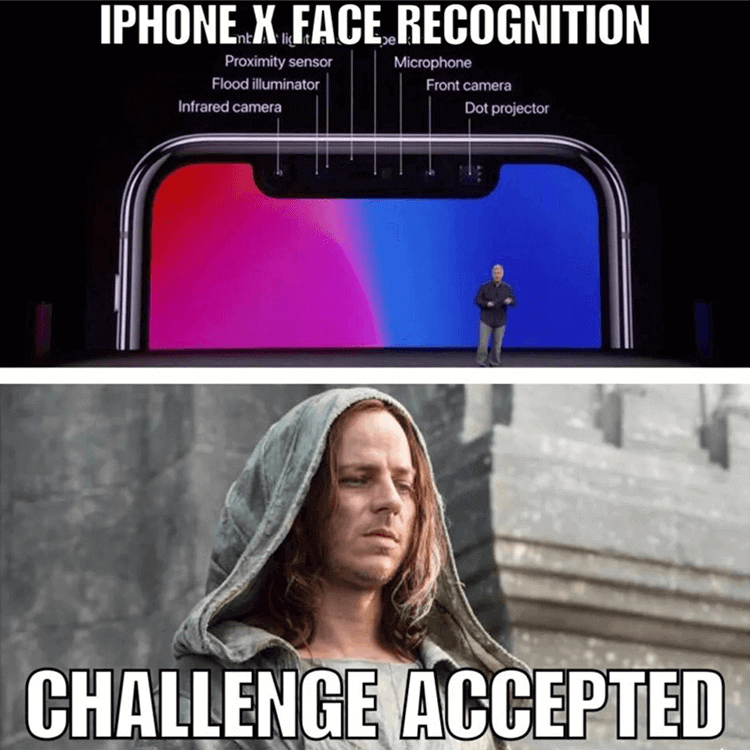 The only men who can unlock everybody’s iPhone X.

Through the new 3D face scan technology, you can create your own 3D stereoscopic dynamic emotions, but also can use dynamic emoticons to produce voice messages, sent to friends, but currently, it only used on iMessage. 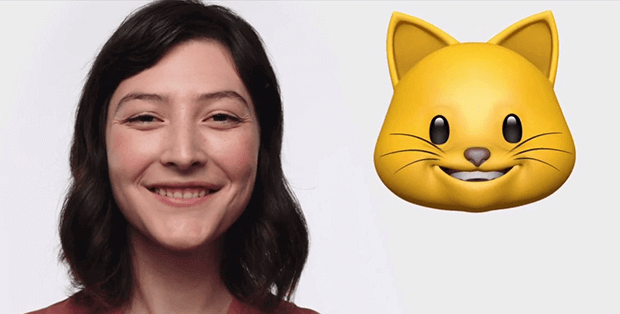 iPhone X has more 2 hours battery life than the iPhone 7. Also iPhone X can be wireless charged. In addition, Apple has also introduced a new wireless charger: Air Power, for the iPhone 8 and iPhone X, Apple Watch, AirPod charge which is expected to be listed next year. 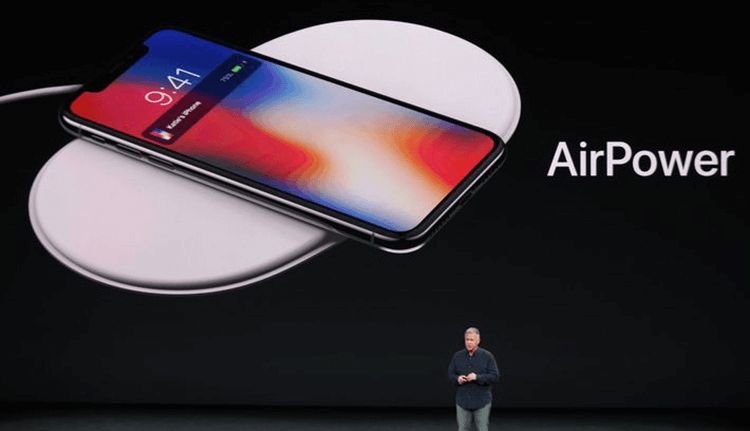 The price of iPhone X is $999 with 64GB and $1,149 with 256GB. That is the most expensive iPhone ever. No matter what is the pricing strategy, I think there are many iPhone fans will go for it.

Before the conference, iPhone's pre-sale has already begun. "People do not care what the new iPhone is, or how expensive it is, because if you want it then you will buy it." 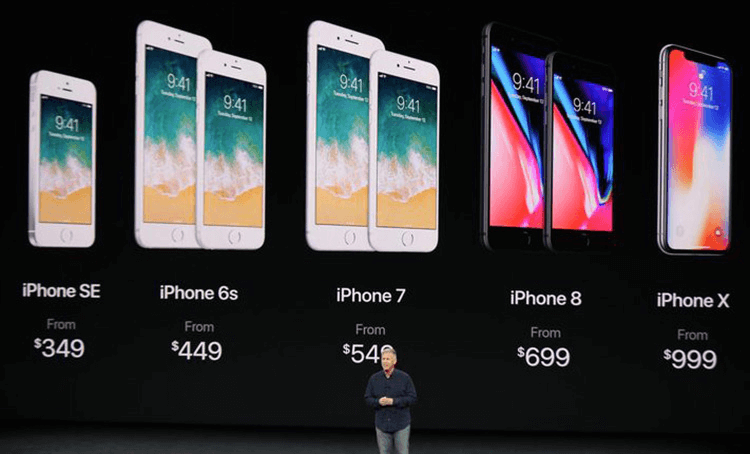 Ok! That’s all the messages about new iPhone.

Here is the introduction video of iPhone 8 and iPhone X.

Are you ready to get one?