What did you know about Holi?

This article is intended to give a brief introduction to Holi.

Beyond that, the Holi celebration is a great feast of music. People carry musical instruments, go from place to place, sing and dance.


1. What is Holi and why is it celebrated?

Holi is considered as the 2nd biggest festival on the Hindu calendar after Diwali.

It’s also known as the Festival of Colors. On this day, People throw colored water and powders on one another. 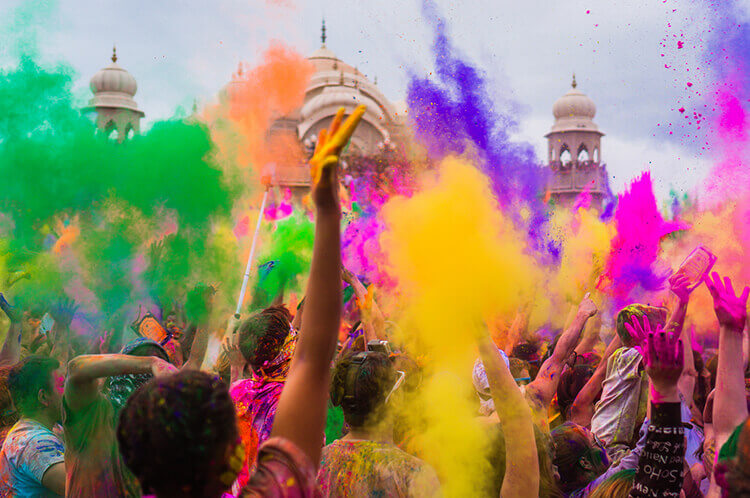 Holi marks the arrival of spring. It commemorates the triumph of fertility, color, love, as well as the victory of good over evil. The festival is celebrated as a day of spreading love, hope, and happiness.

The celebration lasts for a night and a day. It’s mainly celebrated throughout North India on the full-moon day of Phalguna. It’s also celebrated in many parts of India and Nepal and now become popular around the world.

The date of Holi varies every year because it ties up with the moon. Holi is the day after the full moon in March each year.

Below is a chart of the upcoming dates for Holi.

3. How do people celebrate Holi Hindi?

Holi is the festival that lasts for two days.

The first day is known as Holika Dahan. It’s celebrated by burning the death of demoness Holika. People will dance and sing around the fire and walk around it 3 times.

The second day is Rangwali Holi. People play with colored powder and colored water on this day.

Red, blue, yellow and green are the 4 main powder colors. Red is a sign of love, fertility, and matrimony, blue is the color of Krishna, yellow represents turmeric, and green symbolizes new beginnings.

In addition, these powders are made of flowers, herbs, and other natural substances.

Everyone gets involved in Holi. Hindus have fun by throwing colorful powders and water on the street. There are many songs that captured the holiday mood. They are played from the streets to by-lanes. The followings are our run down of the best Bollywood, classic, latest and Bhojpuri Holi songs lists.

That’s all for today’s sharing.

If your favorite songs are missed from the list, no worries!

With Free MP3 Finder, you can also FREE DOWNLOAD them.

If you have any other suggestions or ideas, please feel free to leave a comment below.

Finally, thanks for reading.

Wish you a happy Holi!

Ivy Ross is a blogger and music hunter for 5 years. She is dedicated to discover popular music all over the world, and she has made 100+ playlist which is spread among 1 million users.

AnyMusic is not available
for iOS now

Leave your Email to get direct download links of AnyMusic for Windows, Mac or Android.

AnyVid is not available
for iOS now

Leave your Email to get direct download links of AnyVid for Windows, Mac or Android.

AnyUTube is not available
for iOS now

Leave your Email to get direct download links of AnyUTube for Windows, Mac or Android.