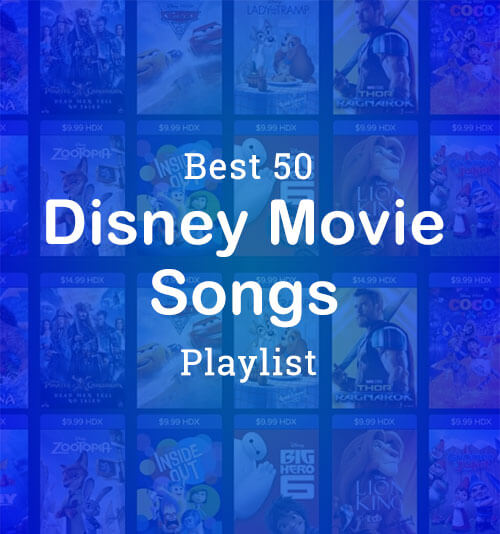 Everyone’s childhood has a Disney dream.

Like a heroic knight standing with a sword and guarding the warmest innocence of my heart. Give us the courage to face the dragon.Also, like a hot air balloon ready to go. So, what’s your favorite Disney movie songs?

Let us always look forward to the distance, fearless.

Come and see if your TOP 1 is on the list.

Part 1. Disney is the Making Machine of Child’s Dream

Disney is a veritable "dream factory" in our lives, whether in our childhood or youth, even in old age. We still believe in these wonderful fairy tales and still want to find our own shadow in these animated images.

I was also one of the grown-ups who was accompanied by Disney animation movies, from Snow White and the seven dwarfs, Pinocchio1940 to COCO, I am familiar with every story. But no movie can have a big impact on me like COCO. This animated film has a great influence on me. Once the soundtrack of the movie rings, it can make my tears gland lose control.

The soundtrack of the movie is also my favorite song. Like the music of every Disney film has always been a highlight of the color, the soundtrack of COCO also shows the unique characteristics of Disney, explaining the beauty of the world. Remember me It is the masterpiece of the song god, it is Ekta's thought, it is MiG's dream, it is the cocoa's memory of the family, and it is the family that cannot be blocked by life and death.”Remember me，tough I have to say goodbye. Remember me, don't let it make you cry, for even if I'm far away I hold you in my heart......”The soundtrack of this movie is really nice, Just like the dead sing to the living.

But why is Disney's soundtrack so appealing? Disney Animation has always used music shows to express some plots to add fun and enjoyment, with a mysterious color or a heterogeneous cultural atmosphere. Through the cooperation of sound and picture, music art can participate in narrative and display characters, bringing the unique perspective and auditory effects to the audience. When making the soundtrack, Disney will make the right music according to the plot of each story and the character of different characters, truly integrate the story into the music, the music is like the line that puts the pearl together, these scattered The pearls are effectively joined together. How can such music be less exciting?

Passion, courage, curiosity, kindness, modesty, friendship...... These precious qualities string the protagonist's wonderful life and teaching us to grow. Not only is the interpretation of classic stories, give the story to the protagonist's new vitality. Those first songs tailored for the film are also not to be missed.

By the end of the 20th century, Disney's animated films used a combination of digital technology and film technology to make the picture more realistic and achieve perfect picture. From the interpretation of classic stories to the creation of humanistic care, Disney continues to give the story to the protagonist's new vitality. In 2018, a "dream-seeking tour" shocked everyone's mind, making most people tears and enriching the connotation of Disney animated films.

The 90s can be said to be the prosperous period of Disney animated films. During this period, Disney created a lot of classic animated movies that are still circulating today. The Lion King is one of them. The Lion King is the first movie in Disney's 50 years that has not been adapted from a ready-made story. It not only created a new animated movie box office record at the time but also won several Oscar nominations and made people redefine the animated film.

Disney produced in the 80sThe Fox And The Hound, The Black Cauldron, The Great Mouse Detective, Who Framed Roger Rabbit and the most famous movie The Little Mermaid. I have seen this story in Andersen's fairy tales before I have seen the Little Mermaid. This is the saddest fairy tale I have seen so far. The mermaid in the story loses its voice in pursuit of love, has legs, but turns into a bubble in the sun. But thanks to Disney, she finally got happiness in the movie.

There are a thousand Hamlet in the hearts of a thousand people, and everyone has a standard of evaluation for Disney classic animation. This list is about Top 10 Disney Movie Songs on YouTube, Let's see if there is a classic in your mind.

From the 1937 "Snow White and the Seven Dwarfs", in the past 80 years, countless classic animated images have come into our hearts.

Because of their existence, no matter where the time machine is, we feel that we are very young. And because of these wonderful animations, we will always be young and always worth going crazy!